How can I find out if my bicycle is compatible with a Stages Power Meter?

We recommend checking frame clearance.
The picture below provides the necessary “CLEARANCE ZONE”. As long as you have the necessary “clearance” between your crank arm and chain stay – you can use left- side and right- side power meters. If you do not have the required clearance select Stages Power Meter R. 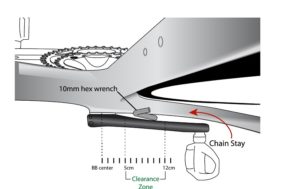 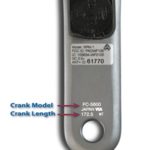 To help find your crank model, check the exterior of the crank for any printed brand and model information. The length of the crank is typically engraved or stamped into the back of each crank arm.

How do I check if my battery is running low?

Checking battery status in the StagesPower app: If you have the StagesPower app installed on your smart phone or tablet, you can easily check the status of your power meter’s battery. The StagesPower app displays an estimated battery life in the lower right corner of the app’s home screen. The battery indicator may take 10 seconds to show up after a connection is made through the app, but once it loads will give you an easy visual reminder on how much battery life you should expect. This battery indicator will display green from the time the battery is new until it starts to run low, then changes to yellow when the battery has only 15-20%, and red at 5% or less power remaining.

How do I calibrate my Stages Power Meter?

Option 1. How do I calibrate the zero offset?

Option 1. Calibrating in the StagesPower App

You can perform a zero reset using the StagesPower app on your mobile device. 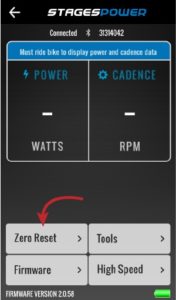 Wahoo Ukraine
We reward you for your trips/ trainings!

Train with us.
In the Dnieper, in Kiev.