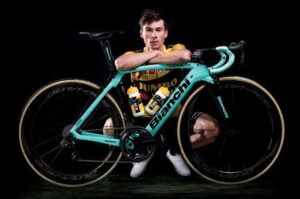 On Sunday, June 21, 2020, Primoz Roglich, equipped with Bianchi Oltre XR4, passed Tadej Pogachar (UAE Team Emirates) on the last kilometre. The final climb was very difficult. The favorite was Tadey Pogachar and it was not easy to get ahead of him. But to win the victory Primoz Roglich helped hard training, a detailed study of the route and the Bianchi Oltre XR4.

Meanwhile, in the warehouse of the VeloFM Group, the new arrival of Bianchi sports bikes! Ask your manager for updates!

Wahoo Ukraine
We reward you for your trips/ trainings!

Train with us.
In the Dnieper, in Kiev.